230118 Cool things are happening in 2023! In May I will do a week long tour with my friend Kalle Moraues together with our new formed band "PK Bluesinferno", look out for dates!

221122 Scroll down to see the upcoming gigs in december!

220830 I will do a big tour with "Thank you for the music" in Sweden together with Kalle Moraeus, Johan Boding and Gunilla Backman. Check out the tour schedual!

220405 In may will I do a clinic tour in the northen Sweden for Ibanez and Daddario, look out for dates!

220326 I´m going on a Toto Tribute mini tour in april with a killer band! Check out the video below!

220122 If you scroll down you can watch a brand new video Ibanez just uploaded with yours truly!

220117 Check out the new video on the media page. A killer Scott Henderson tune!

211217 In February 2022 I will be once again playing the musical Chess! This time at the arena in Helsingborg. POSTPONED to june!

211108 Check out the spotify link on the bio page for the latest releases with Pelle featured on guitar!

210523 There is now a Spotify list at the Bio page with some of the songs that Pelle plays guitar on!

210510 Go to the Bio page for a cool interview with Crafton!

210412 Scroll down to see the new guitar video for Ibanez!

210309 This week we will do a Hendrix show on thursday 11th march and a PHG show with Magnus Lindeberg on saturday 13th march, both at Viva Lund!

200215 More viva coming up! We will play there on this saturday 20th of February!

210104 PHG will do a live show at Viva Lund the 23rd of January. Go to Vivas facebook page to stream!

21014 PHG will do a live show at Viva Lund the 23rd of January. Go to Vivas facebook page to stream!

201118 I´m is now offering guitar lessons through Zoom and Skype. Send me a email and we´ll hook up!

200930 I´m really honored to be a member of the Slickbag family!
Check it out these great cases

200826 Kalle Moraeus will join PHG on a tour in September, check the dates!

200605 There´s still some gigs this summer, check it out at the gig section!

200324 Due to the Corona Virus most of the gigs has unfortenaly been cancelled! Stay safe out there!

190508 PHG will release third record "Damn Good" this friday. We will play at Galej in Göteborg on friday and Scandinavian Guitar show Fuzz on saturday. I´ll also will do two clinics for Ibanez there!

190410 A lot of cool stuff coming up! I´ll be doing two clinics during the Scandinavian Guitar show Fuzz and also a PHG release gig with our new record at Fuzz. Check out the PHG page for more info. Also in May I will go on the road with a Ray Charles Tribute including a lot of great Swedish artists, more info to come.

190109 PHG will play one saturday each month at Resturant Viva in Lund. Check the PHG page for dates!

181213 PHG will do a live show at the Larvik Guitar Festival Norway in March!

180522 If you come to The Scandinavian guitar show FUZZ this weekend you can hear me play at the Ibanez and Daddario booth!

180507 I´m very thrilled to announce that I have become an Ibanez artist! Scroll down and take a look at the video me and my friend Magnus Olsson did for them!

180214 Scroll down and check out the video I did for my new endorser Lunastone!

180101 We have some really fun gigs coming up with PHG check it out!

170910 I´ll be playing guitar in the musical Chess until December. Really excited to play this fantastic music. Hope to see you there!

170626 The tour with Jojje Wadenius was a great success. We were featured on Mats Nermarks Fuzz review, thank Mats!
If you want to hear a song from the tour, scroll down!

170430 I was just recently a guest on the Guitarzombie Podcast. I brought my guitar and played some licks! Check it out

170401 I´ve made a demo for my new sponsor Carl Martin. Check below and listen to some plexitones!

170321 PHG wants to thank Ola Gränshagen at Melodic Net for his nice review on our album Ghost Ship! Read about it here

170205 Great news! PHG will go on tour with Georg "Jojje" Wadenius. Dont miss this! More info on the PHG section.
11th of May Viva Lund
12th of May PM & Vänner Hotell Växjö
13th of May Scandinavian Guitar Show Fuzz Göteborg

170112 I have teamed up with my friend and fellow guitar player Christian Fridh in our new band "Two of a Kind". We play westcoast fusion in a tribute to the Baked Potato in LA. Take a look at the Media page and you will a find a live video from our first gig!

170105 Happy new year! A lot of cool stuff is happening this year, a lot of new projects and bands. A big thanks to my new sponsor Carl Martin for providing me with the fantastic Octa-Switch MKIII

161031 PHG has just released two new videos! Scroll down and take a look at the first one. You can find the other one on the Media page

160620 We have a new video with PHG out. Live from KB Malmoe, scroll down and take a look!

160603 I want to thank my new sponsors Crafton and Polysonic for helping me out with Daddario strings and Dunlop Jazz III Ultex guitar picks.

160502 PHG will do a clinic and live show with Olsson Amps at Elmelids Musik in Höör the 25th of May, dont miss it!

160426 The Scandinavian guitar show Fuzz is soon coming up. I will be at the Olsson Amps booth and Malmö Musikaffär booth for some jammin and hangin out.

160410 More exciting news with PHG. We will be support act to Lee Ritenour at KB in Malmö 4th of June! Read about it here

160311 New shows with PHG! We will play some new material so don´t miss it!
6th of April clinic at Oskarshamns Folkhögskola
6th of April live show at "Flamman" in Linköping

151215 I have recorded and filmed a demo of the new pedal "The Wizard" by Olsson Amps, a great sounding pedal! Frank Nilsson and Mathias Tofte is featured on drums and bass. Take a look!

151116 I´m playing guitar on "The soul of Christmas" with Lagaylia Fraiser. It´s premiere on saturday and we will play every thursday to saturday until the 19th of dec Check it out!

151106 The video with PHG feat Jojje Wadenius is now released. Scroll down the page and take a look!

151023 Today PHG recorded a song at Handsome Hard Studios with the legend Georg "Jojje" Wadenius. Frasse Franzen made a great video and it will be available for all of you soon at youtube and more.

151018 This tuesday the 20th of October will Pelle and PHG do a clinic with Olsson Amps at Malmö Musikaffär. We start to play at 18.30 and later in the evening we play a full show at Moriska Paviljongen.

150913 PHG will play a show at Moriska Paviljongen in Malmö 20th of october. Stay tuned for more info!

150818 Check out this interview with Pelle about guitar playing and the search for a good tone. Written by Swedish guitar blogger Gitarrzombien Read it here!

150608 Mats Nermark wrote nice things about me in the Fuzz guitar show report, thanks Mats! Read it here

150526 You can now find our new PHG poster at the press section. Also there are some new videos below and at the media section. Check out when Pelle plays three different Olsson Amps.

150503 The Scandinavian guitar show Fuzz is coming up this weekend. I will hang out at the Olsson Amps booth, and PHG will play on sunday at 12.00. Be there!

150422 Dont miss PHG at Swedish Radio Blekinge this friday at 16.00. There will be interviews and live performances. PHG will also do a release gig at Scandic Karlskrona 20.00

150407 This is a movie from Olssons amp shop and our song Ghost Ship is played through the whole video, thanks John Olsson! Take a look

150314 You can now purchase "Ghost Ship" through using Paypal. Conctact pelle@pelleholmberg.se for details.

150227 PHG´s new album Ghost Ship is now available. Check out the new PHG section for more info and get your own copy.

150215 Frasse Franzen has taken great photos that can be used for as press material. You'll find them in the press section.

150206 PHG´s new album "Ghost Ship" is now on print and will be available in a couple of weeks! The PHG tour in Finland is set, be sure to check out our Facebook page for more info.

141201 The movie master Frasse Franzen and I did a promo video of John Olssons Custom 36 reverb amp. Take a look here.

141111 For all you guitar nerds out there! Check out my new gear page.

141028 The first song from the new PHG album is here! Check out my media page, hope you like it!

141015 I just got an endorsement from the great Olsson Amps. From now on I'll be using their custom 36 reverb as my main amp. Check out their website! www.sv.olssonamps.se

140927 Today its premiere for the musical Little Shop of Horros in Kristianstad. Exciting! We will play every weekend until november 23rd, hope to see you there! 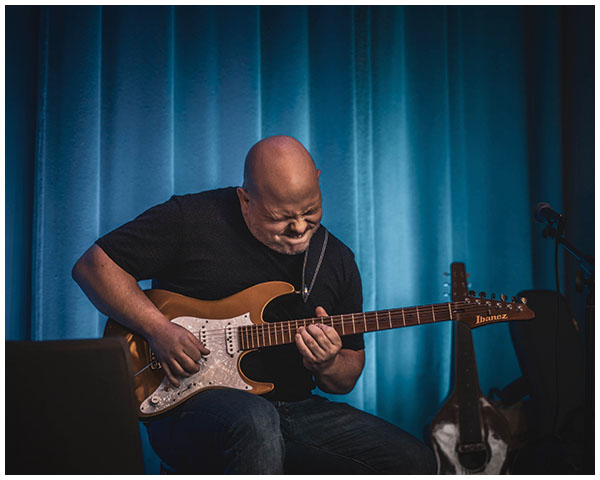